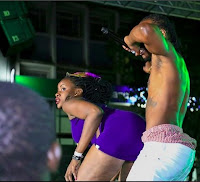 Friday, February 22, 2019 – The Kenya Film Classification Board (KFCB) CEO, Ezekiel Mutua, has warned that the board will ban public performances that “dishonour and contravene common decency and those that objectify women”.
This comes days after Mutua, who has been aptly christened as the Kenyan moral policeman, castigated singer Akothee, over her raunchy performance in Watamu.
In a statement on Thursday, the KFCB CEO said the board has examined numerous artistes and performers and found that some of their performances are offensive, unpalatable, inappropriate and contravene the law.
“The Board is disturbed at the extent to which some famous artistes are going to attract audiences and relevance by exposing their private parts in public, gyrating in obscene ways and failure to uphold common decency in their public performances,” said Mutua.
“Mutua further warned; “artistes and performers using inappropriate and offensive stage names, inappropriate lyrics, nudity or suggestive dancing styles that border on sexual innuendos, particularly in public places will face the full force of the law.”
The Kenyan DAILY POST

US calls for immediate resumption of Libya oil operations

Uhuru: Brexit to give Kenya-UK a chance for stronger trade ties

First case of China virus in US after outbreak kills six people | US...